Figure 30 below shows typical energy efficiency characteristics of a boiler that is normally specified by boiler manufacturer. As can be seen, the boiler efficiency is a factor of its load.

In operation, the efficiency tends to be lower than the above design values. There are a number of major areas that need to be managed in order to keep the auxiliary boiler at its highest energy efficiency levels as signified by figure 30 above.

The boiler main function is to generate steam at correct pressure and temperature and with best energy efficiency. Optimal energy efficiency means optimal transfer of fuel energy to boiling water via a lot of boiler pipes and heating surfaces. Aspects that could lead to a reduced rate of this heat transfer include:

The above will normally translate into a less heat transfer from gases of combustion and more heat retention by the exhaust gases as they leave the boiler. Thus high boiler outlet exhaust gas temperature could be a good indication of such fouled conditions. To remedy the case, maintenance practices should include boiler’s soot blowing, de-scaling, good water, combustion adjustments (to reduce soot formation) and so on.

For this purpose, the heat transfer areas of the boiler must be monitored. The soot blowing of the boiler must be done regularly as build-up of soot acts like an insulator and reduces the heat transfer rate. The same goes for the build-up of scale in the water tubes. The stack temperature must be monitored regularly and any increase in it means that heat recovery is not optimum. High increases of exhaust gas temperature beyond those experienced after the last cleaning would indicating build-up of fouling and would require another cleaning action. All this leads to weakened energy efficiency and increased emissions.

There is a hot well that collects all the condensates from steam system end-users plus where water treatment and cleaning may take place. It is from hot-well that the feed water is supplied to the boiler. Hot well temperature must be maintained at temperature specified by manufacturers. A low temperature (e.g. below 80-85ºC) will cause colder feed water to enter the boiler thus increasing the fuel uptake and emissions due to the need for more heating for evaporation. An overheated hot well may cause evaporation of water at the suction of feed pump (e.g. cavitation) and cause vapour lock in the feed pump and loss of suction. For heat retention in the hot well to keep temperature higher, heat losses due to poor insulation can be reduced. Also, control of make-up water is important as excessive need for make-up water will be indicative of leak in the steam system as well as more heating for make-up water that is normally at low temperature.

The blow down of the boiler is required for controlling the amount of dissolved solids as a result of evaporation and impurity of make-up water or addition of other chemical. Blow down must be calculated and done after measuring the level of dissolved water. In some cases, the engineers blow down the boiler excessively, thus not only loose hot water, but also increase the need for make-up water and make-up water generation.

In order to burn the fuel, air needs to be supplied to the boiler. The excess air unused in the combustion gets heated and then discharged through the chimney. This is waste of energy. Thus, any excess air that is not needed for combustion will cause energy loss as it will take away heat from boiler and discharge to the atmosphere, thus normally should be avoided.

Boilers normally have certain amount of optimal excess air and the air input must be adjusted to this level. It signifies a balance between combustion efficiency and amount of air supplied. Excessive “excess air” is identified in the form of either high O 2 concentration or low concentration of CO2 in the boiler exhaust gas. These two parameters thus need to be monitored as part of controlling boiler excess air thus its energy efficiency. Figure 31 below shows the boiler efficiency as a function of CO2 concentration. As can be seen, it is desirable to maximize the CO2 concentration in the exhaust gas for best efficiency. As indicated, the optimum level would normally be specified by the manufacturer. 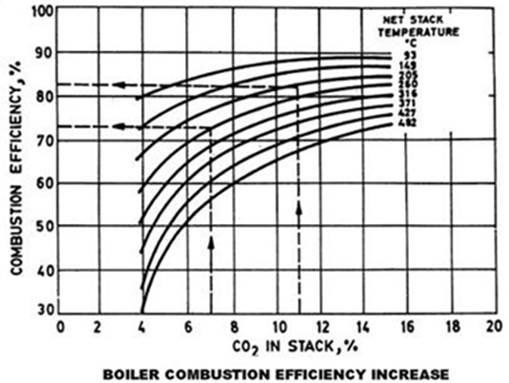 Figure 31: Boiler efficiency as a function of CO2 level in the exhaust gas (MariEMS 2017).

The efficiency of an exhaust gas economiser can be improved by increased soot blowing frequency (once or twice a day while at sea). Recording the exhaust gas temperature difference and pressure drop can provide an indication of economiser cleanliness. Water washing should be scheduled into major repair periods. The exhaust gas economiser maintenance will not only improve energy efficiency but also reduce maintenance overall costs and reduce safety risks associated with soot fires. Occasionally use of fuel additives may improve the cleanliness of the economiser.

As for ship design, the maximum waste heat recovery is desirable. For exhaust gas economisers, the funnel stack temperature must be as low as possible but with sufficient margin to be above the dew point to avoid sulphur corrosion. Generally, a funnel temperature of 165 to 195 ºC when using fuel oil is considered optimum.

Like any other devices, the boiler energy efficiency is a factor of its load factor. Figure 32 below show typical of such efficiencies.

Operating the boiler at low load is thus inefficient. Avoiding low load boiler operation will depend on ship type, number of boilers and where the steam is used. Generally, if there are two auxiliary boilers on a ship, they must not run in parallel if one can supply the whole steam demand; unless safety issues dictates the need for such a parallel operation case (MariEMS 2017).