The Attained EEDI is the actual value of EEDI for a ship and represents the amount of CO2 generated by a ship while doing one tonne-mile of transport work. In simple term, it may be represented by equation (1):

Attained EEDI is calculated using the “EEDI formula” as shown below:

The items that primarily influence EEDI are:

Various terms in equation are fully defined in the relevant IMO guidelines summary of which is given in table below. 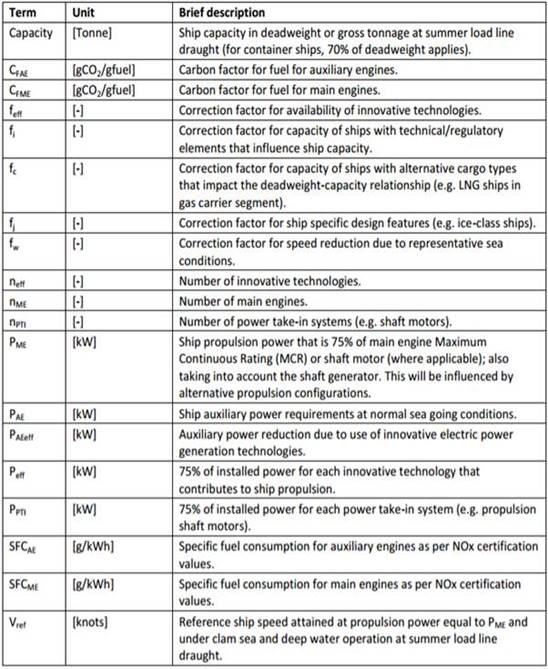 More details of the important parameters are given below:

To calculate EEDI, all the measurements and data used should be corrected to the above conditions (MariEMS 2017).

For verification purposes and subsequent implementation and enforcement purposes by flag and port States, it is a requirement that all the relevant terms and their values shall be recorded in an “EEDI Technical File” and then submitted to the verifiers (normally Recognized Organization on behalf of flag State) that will carry out the certification on behalf of flag Administration. Also, the “EEDI Technical File” needs to be kept on board and forms a supplement to International Energy Efficiency Certificate (MariEMS 2017).