With a view to addressing the issue of air emissions from international shipping, IMO in its 1997 MARPOL Conference adopted MARPOL Annex VI on prevention of air pollution from ships and also adopted Resolution 8 on ships CO2 emissions as a starting point inviting:

This was the starting point for IMO debates and decisions on GHG emissions from international shipping that still continues. Figure 5 below provides the important chronological order of the IMO activities so far since 1997”. (IMO: Module 1. 2016, 52.) 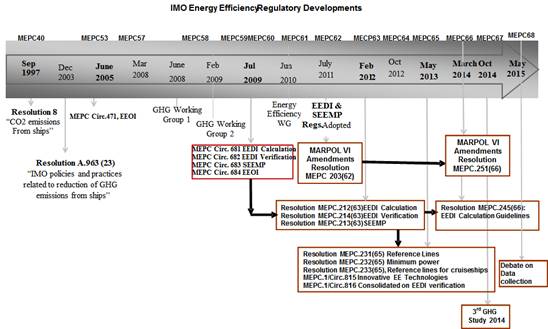 “Further details of the IMO activities are given below in chronological order.

As a follow-up to Resolution 8, the First IMO GHG Study 2000 was completed and presented to the forty fifth session of the MEPC (MEPC 45) in June 2000.

In an effort to further address the issue of GHG emissions from ships, the IMO Assembly adopted, in December 2003, Resolution A.963 (23) on "IMO Policies and Practices related to the Reduction of Greenhouse Gas Emissions from Ships." As follow-up to this resolution, MEPC 55 (October 2006) approved the MEPC’s "Work plan to identify and develop the mechanisms needed to achieve the limitation or reduction of CO2 emissions from international shipping," inviting Member Governments to participate actively in the work plan.

“The MEPC work plan culminated at MEPC 59 with the MEPC agreeing to a package of technical and operational measures to reduce GHG emissions from international shipping and also agreed on a plan for further consideration and development of suitable and efficient Market Based Measures (MBMs) to complement the technical and operational reduction measures and to provide economic incentives for the shipping industry. The MEPC further agreed that any regulatory scheme to control GHG emissions from international shipping should be developed and enacted by IMO as the most competent international body

MEPC 59 finalized a package of technical and operational measures in the form of Guidelines for EEDI, SEEMP and EEOI. Relevant Guidelines developed and approved (in the form of Circulars) for the then voluntary application.

The agreed package of the above technical and operational measures is a very important step in ensuring that the shipping industry has the necessary mechanisms to reduce its GHG emissions. However, the MEPC recognized that these measures would not be sufficient to satisfactorily reduce the amount of GHG emissions from international shipping in view of the growth projections of world trade. Therefore, MBMs was considered as a market-driven option by the MEPC in line with its GHG work plan. At the time, it was understood that a good MBM would serve two main purposes: (1) Offsetting in other sectors of growing ship emissions and (2) Providing a fiscal incentive for the maritime industry to invest in more fuel efficient ships and technologies and to operate ships in a more energy efficient manner.

The main work accomplished during this session was the preparation of the “draft regulatory text” on mandatory requirements for the EEDI for new vessels and on the SEEMP for all ships in operation. The MEPC realised that to finalise the regulatory text, it is required to decide on issues concerning ship size, ship types, target dates and reduction rate in relation to the EEDI requirements. The MEPC agreed in principle on the basic concept that a vessel's Attained EEDI shall be equal or less than the Required EEDI, and that the Required EEDI shall be drawn up based on EEDI reference lines and reduction rates. This became the subject of additional work and use of concrete methods for calculating the EEDI reference line using data from existing ships in the IHS Fairplay database. With regard to MBM, the MEPC agreed to establish an Expert Group on the subject to undertake a feasibility study and impact assessment of the various proposals submitted for a MBM instrument for international maritime transport.

Having considered means by which technical and operational measures could be introduced in MARPOL Annex VI, there was further debates and agreement on how these regulatory texts should be introduced. The debate concentrated for the IMO Secretary-General to circulate proposed amendments to MARPOL Annex VI for mandatory application of EEDI and SEEMP regulatory text and relevant Guidelines that have already been disseminated for voluntary use. The issue of circulation by the Secretary General was the subject of much debate as some States did not consider it appropriate”. (IMO: Module 1. 2016, 53-54.)

“The scope of the work of the Expert Group was to evaluate the various proposals on possible MBMs, with the aim of assessing the extent to which they could assist in reducing GHG emissions from international shipping, giving priority to the maritime sectors of developing countries, least developed countries (LDCs) and Small Island Developing States (SIDS). The MBM proposals under review ranged from a GHG Fund or levy on all CO2 emissions from international shipping or only from those ships not meeting the EEDI requirement, via emission trading systems, to schemes based on a ship's actual efficiency, both by design (EEDI) and operation (SEEMP).

The MEPC agreed Terms of Reference for an intercessional meeting of the “Working Group on GHG Emissions from Ships” to deal with relevant schemes and submissions and report back to MEPC 62.

The final breakthrough came at MEPC 62. As a result of lengthy deliberations, the amendments to MARPOL Annex VI in the form of “energy efficiency regulations for ships” was added as a new Chapter 4 to MARPOL Annex VI as a result of which EEDI and SEEMP became mandatory for applicable ships. Other amendments to Annex VI included addition of new definitions and the requirements for survey and certification, including the format for the International Energy Efficiency Certificate.

An important series of guidelines to support the uniform implementation of mandatory measures for ship energy efficiency (EEDI and SEEMP) was adopted by the MEPC in this session. During this session, the MEPC also continued its intensive discussion on MBMs for application to international shipping.

The MEPC continued to refine relevant Guidelines on calculation and verification of EEDI. MEPC additionally approved the following:

“During this MEPC meeting, the following were accomplished:

The following aspects were discussed but no substantive decision made:

The following activities were carried out:

In this session of the MEPC, the following were agreed: