For each category, the IMO commissioned study presents a summary table within which the list of measures (first column) is given together with the applicability, retrofit-ability, applicable modes, and emission reduction potential for NOx, PM, SOx and HC and last but not least the “energy consumption” that denotes energy efficiency of some form. In the following, a brief description of findings on various categories and measures are given. Engine technologies (figure below) shows the engine related technologies that are to a large extent comparable to items covered under ICCT report (see Figure 39 below). 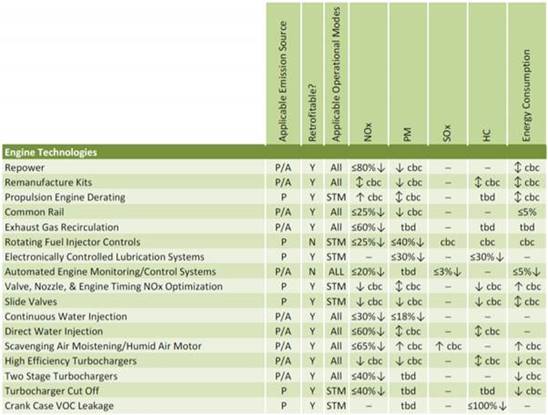 As can be seen, many technologies are judged to be retrofit-able, they apply mostly to both propulsion and auxiliary engines, and their impacts on energy consumption and GHG emissions could not be quantified. Some of the measures could have negative impacts on energy efficiency.

Figure 40 below shows the after-treatment technologies that are mainly related to diesel engines exhaust gas after treatment systems. These technologies include scrubbers, SCR etc. and the main aim for their use is to reduce exhaust pollutants rather than CO2 emissions.

Figure 41 below shows the alternative fuels that includes a large list of options such as natural gas, low sulphur fuel, biofuels, methanol and so on.

As can be seen, many of alternative fuels are judged to be useable with current technologies (retrofit-able). Some demonstrates significantly reduction potential for exhaust gas pollutants. They may lead to reduced energy use or GHG emissions depending on a case by case analysis. The case for alternative fuel is well known to industry, regulations on ECA (Emissions Control Area) forces industry to use low sulphur fuel or other relevant alternatives in designated areas and the move to natural gas in the form of LNG is underway in some parts of the world.

As can be seen, the onshore power system is the most effective system for reducing ship air pollutants. On other technologies, the level of reductions is not clear and will be case by case dependent. Also, on energy consumption and GHG emissions, the impact is not clear cut and the number for on-shore power only refers to ship-board fuel consumption reduction since same amount of energy will be used but this time in the form of electricity from onshore (MariEMS 2017).