From 1959, the IMO has actively taken responsibility to issues caused and related by pollution by marine industry. The Organization is playing a key part in supporting the development of regulations to prevent marine pollution and introduces technologies and specifics as defined by the UNCLOS:

Maritime Environment Protection Committee (MEPC) is the IMO committee in charge of addressing the environmental issues for the IMO. This Committee is supported by Sub-Committees sometimes shared with the Maritime Safety Committee. Also, the MEPC sets up working groups that deal with various items of its agenda (e.g. ballast water, air pollution, GHG emissions, etc.). The Committees and its working groups are supported by the IMO Secretariat that deals with all related administrative aspects.

The MEPC may issue circulars and resolutions as well as draft resolutions to be adopted by the Assembly. The MEPC meets three times over two years (twice 1 st year and once second year). During the MEPC sessions, various working groups or correspondence groups may be established to address particular issues. All States represented at the IMO may participate to discuss the issues related to pollution prevention and control as well as industry representatives and NGOs (Non-Governmental Organisations). Decisions are normally reached through consensus but if there is a need for voting, only Parties to relevant Convention (e.g. MARPOL Annex VI, Ballast Water Management) are eligible to cast their votes.

The IMO’s Marine Environment Division supports the MEPC and deals on a daily basis with relevant environmental issues but above all supports the working of MEPC and other IMO divisions in related areas. Today, the IMO regulations cover the whole ship’s pollution risks, specifically dealing with the following Conventions: 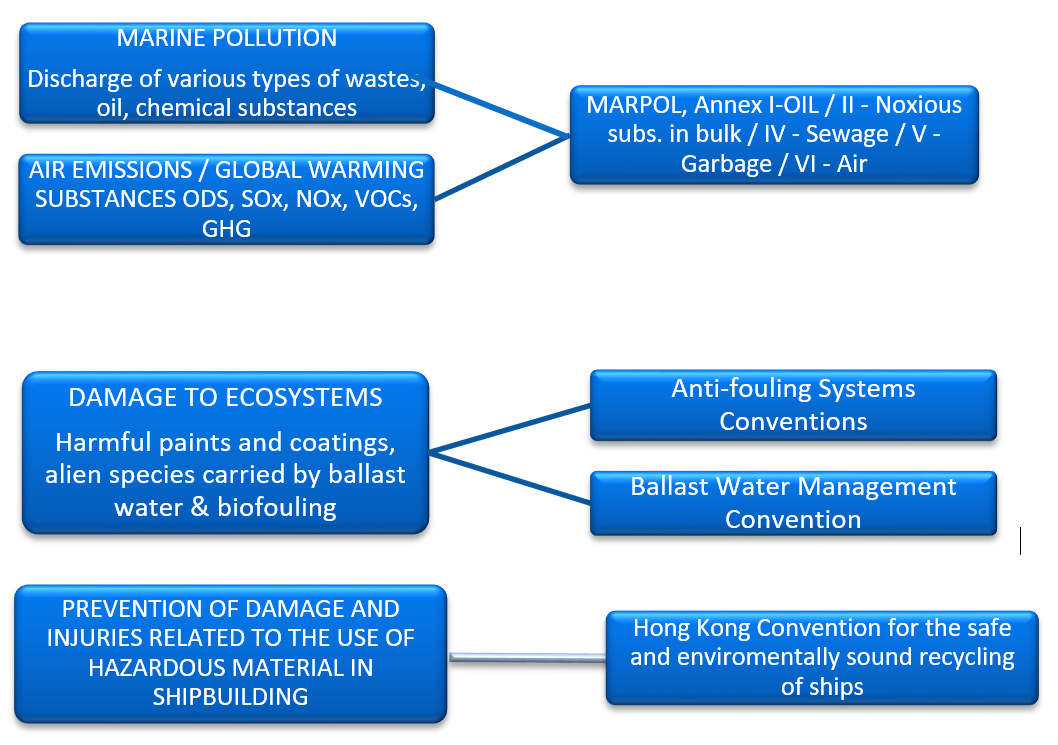 The IMO shows a strong willingness to address the issue of the climate change by promoting innovative regulations in the framework of the UN discussion on GHG emissions. This disposition has been demonstrated through the adoption of various instruments during MEPC 62 in 2011 and the intensive discussions on developing further technical and operational measures such as data collection system for ships as part of wider MRV (Monitoring, Reporting and Verification) debate. While taking part in the Climate Change debates at the UN, IMO will proceed in parallel with its own programme of work (Ziarati et al, MariFuture, Development Papers, 2018-2019).